‘A Real Living Contact with the Things Themselves’ by Irénée Scalbert

This book of essays bears witness to some of the more significant developments in architecture during the last 25 years. The essays alternate between detailed studies of major buildings, written while these were being designed or as they were being rediscovered after a period of oblivion, and broader historical surveys that seek out the origin of contemporary architectural ideas. More than its extent, however, what distinguishes this writing is that it is the result of direct experience – of interviews with architects, clients, engineers and users, and of the pleasurable, at times rapturous contemplation of architecture.

Irénée Scalbert is an architectural critic and historian based in London. He is the author of A Right to Difference: The Architecture of Jean Renaudie (2004) and Never Modern (2013). He is a lecturer at the University of Limerick. He has taught in many places including the Architectural Association in London, the Politecnico in Milan and Harvard University.

A Real Living Contact with the Things Themselves will be available for purchase at the launch at a cost of €25. 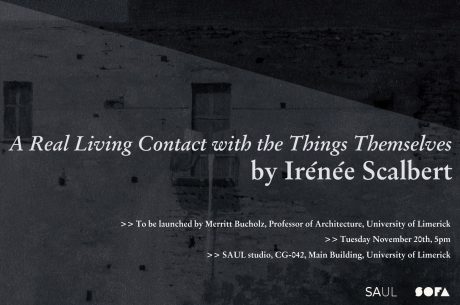